Craftivism works! How using a "gentle protest" approach can win

Share:Facebook Twitter Google+
2,426 Views
0 Share
Sarah Corbett, founder of the Craftivist Collective, explains how arts and crafts can be used as powerful forms of protest. In Huck, 2016 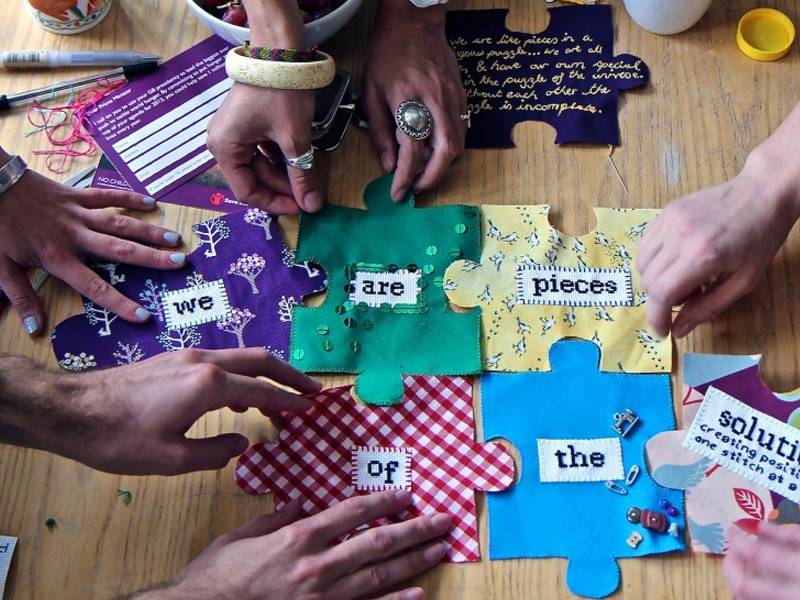 After all the madness and injustice we’ve seen in 2016, many activists have been looking to expand their arsenals. It might be the last thing you’d think of, but for the Craftivist Collective, the needles and thread have become indispensable tools for change – but not as weapons of war to impale the establishment upon, this is peaceful protest, mind.

For the Craftivist Collective, art can be a powerful means to heal our collective wounds and embroidery is often their nuclear option. They bring craft and activism to unite people through creativity, partnering with charities to take on big corporate interests, like Marks and Spencer’s who they convinced to pay its employees a living wage.

But the Craftivist Collective’s future hangs in the balance. Founder Sarah Corbett is fundraising to allow her to continue her activism and powering social change through arts and crafts. 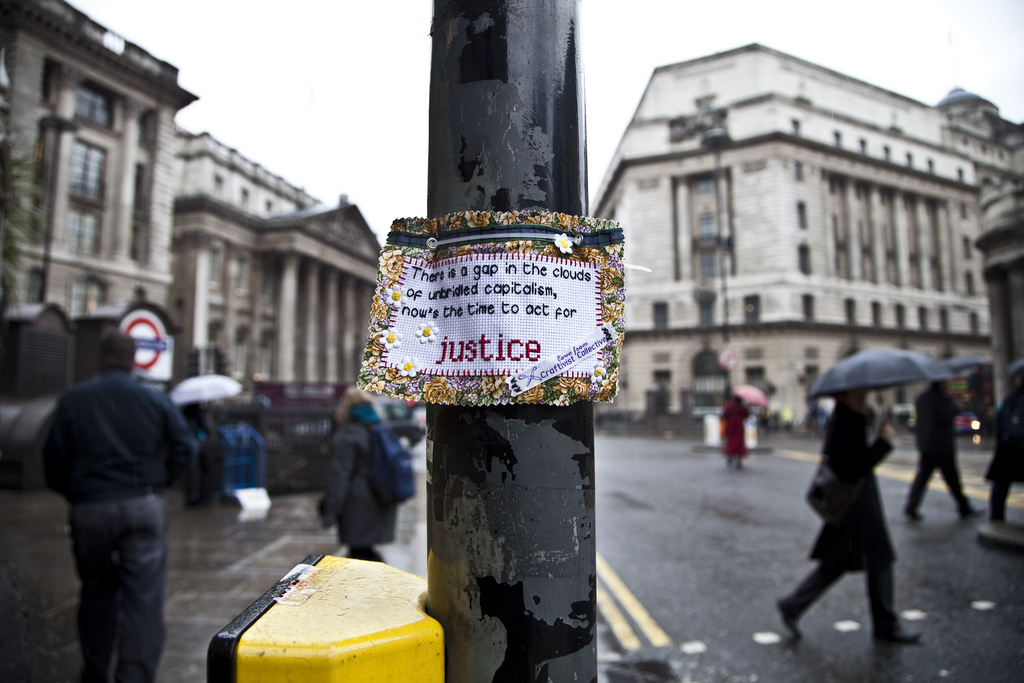 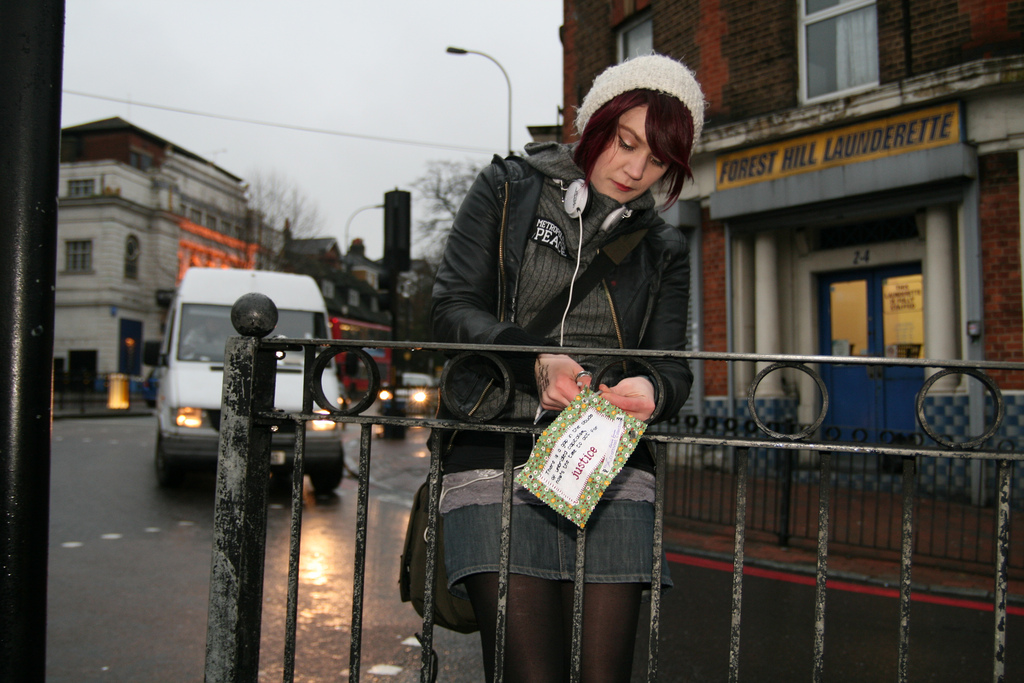 What is craftivism all about?
My approach is using crafting, such as handicrafts and embroidery, as a gentle form of activism. It allows the creator to stop and think about what they’re doing and the message they’re trying to convey. Sometimes we make gifts to remind people to be good citizens, or for people in power to implore them to help make a positive change. It’s all about provoking thought and action.

You have been involved in activism for pretty much all of your life – what advantages do you feel that craftivism can have over more conventional forms of activism?
I’m an activist first, but I feel that craft can be really useful. I don’t just shoehorn craft into things that aren’t necessary, but I feel that often we don’t slow down and think about what we’re doing. There needs to be a graceful form of activism – it’s not about making enemies but building bridges. We can only get so far when we shout at each other and I feel that we need to reintroduce the art of conversation into activism. And something like a handicraft or small piece of street art can provoke those conversations. 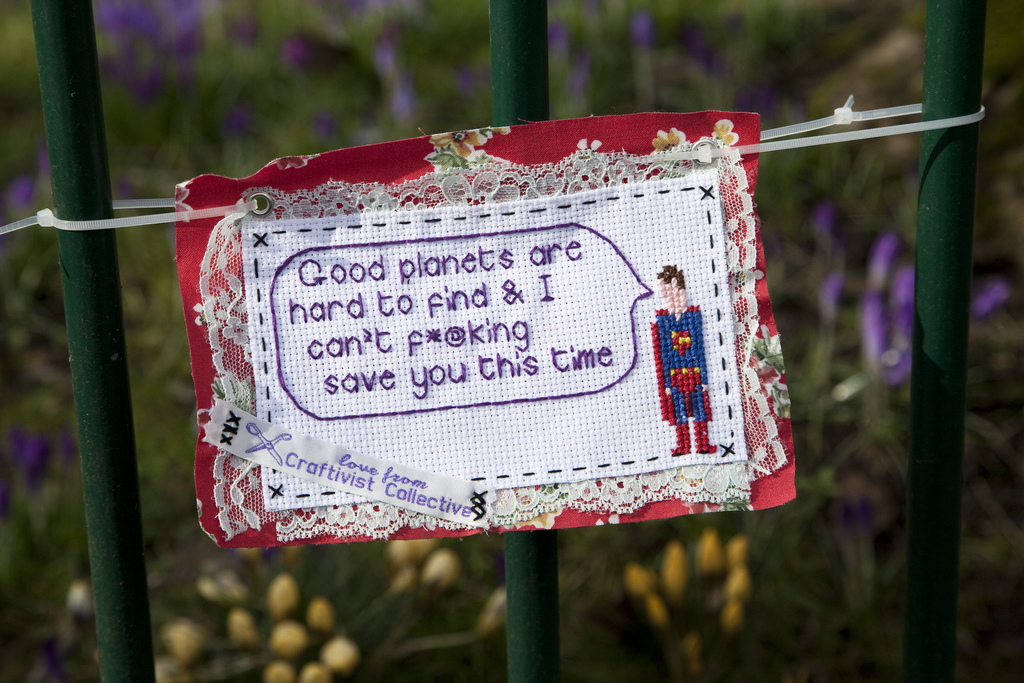 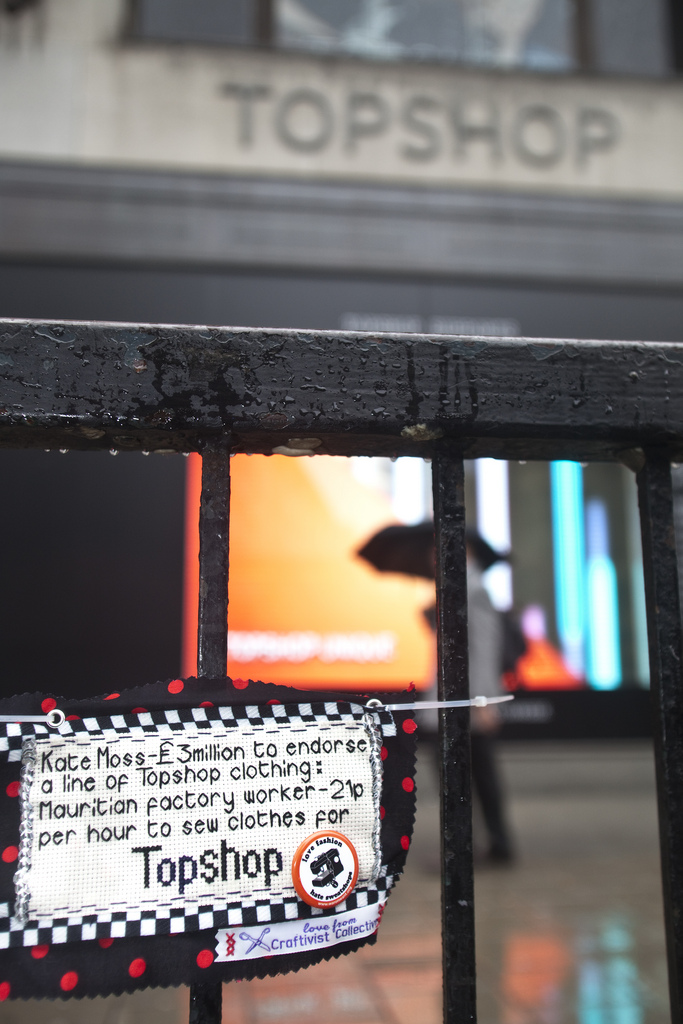 Art and activism seem to go hand in hand, wouldn’t you say?
Historically they have often come together, but mostly it’s just to raise awareness. Instead of empowering people it can actually disempower them, because the response is often quite apathetic. The craft is the tool and the activism is what we do, so it’s important that we’re more strategic and critical; sure we can create a beautiful piece of art, but is it activism or just raising awareness? 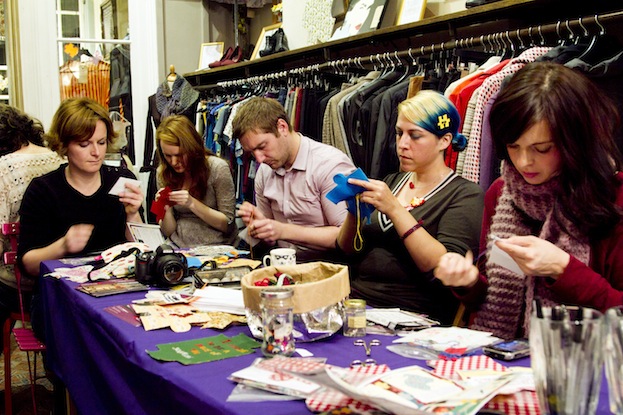 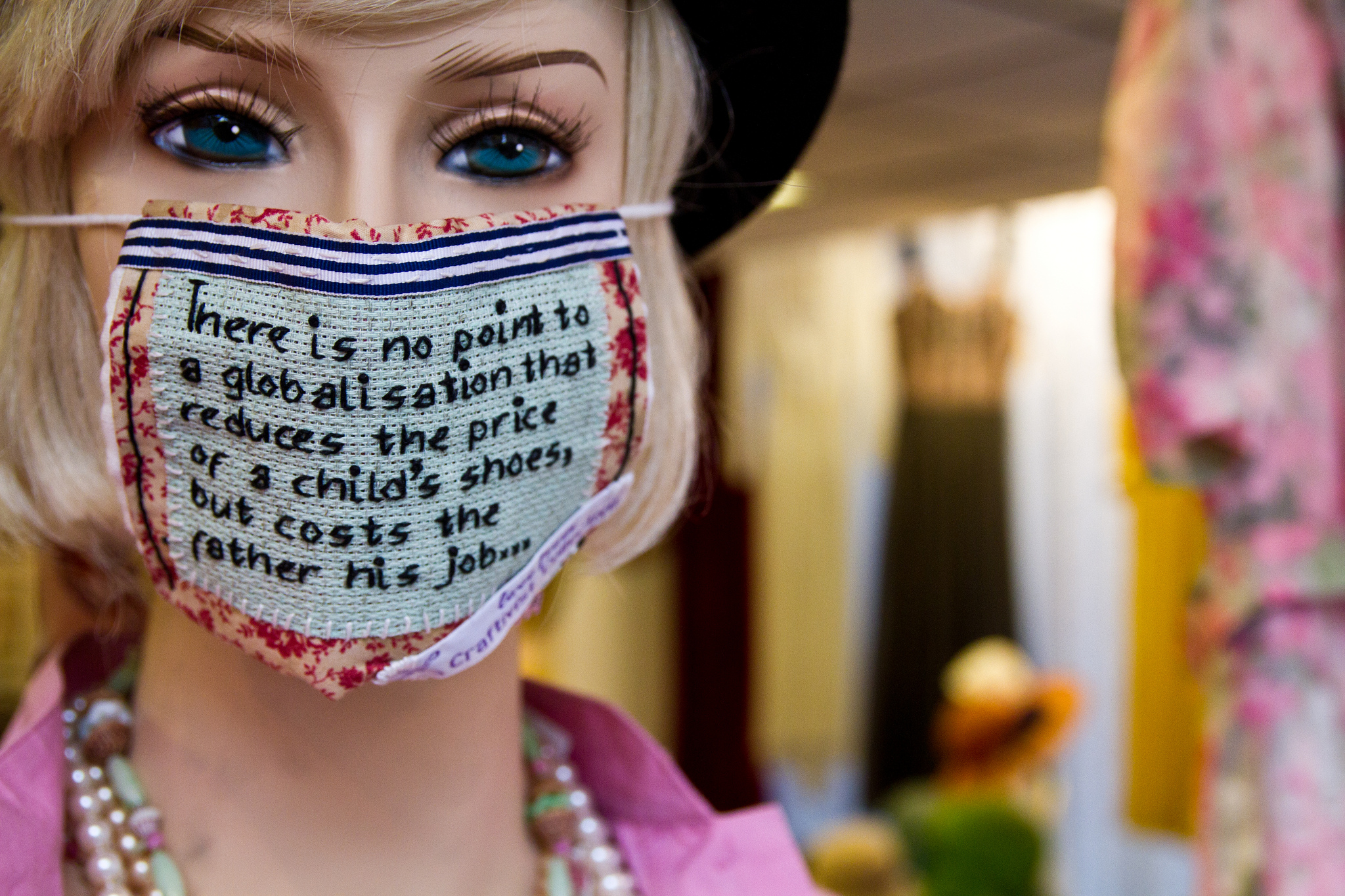 You’re running a pretty personal campaign now called Adopt a Craftivist– tell us more about project…
It’s not actually one of the collective’s projects. I’ve been working on a book and had to leave London so I can actually afford to do it. Anyone who works in the creative industries or campaigning knows there isn’t much money in it. So I’m trying to raise money for me to continue my work.

It could be seen as quite a controversial campaign asking people to donate to you…
That was my worry; “will people just see this as me trying to fund myself?” But I do feel we need this more inviting and gentle form of activism. If there was already someone providing that I wouldn’t do it, but there isn’t. This is much bigger than me; it’s not just about giving me money for something I enjoy (not to say that I don’t enjoy it but it’s bloody hard work!). I launched the campaign three weeks ago and the feedback has been lovely. 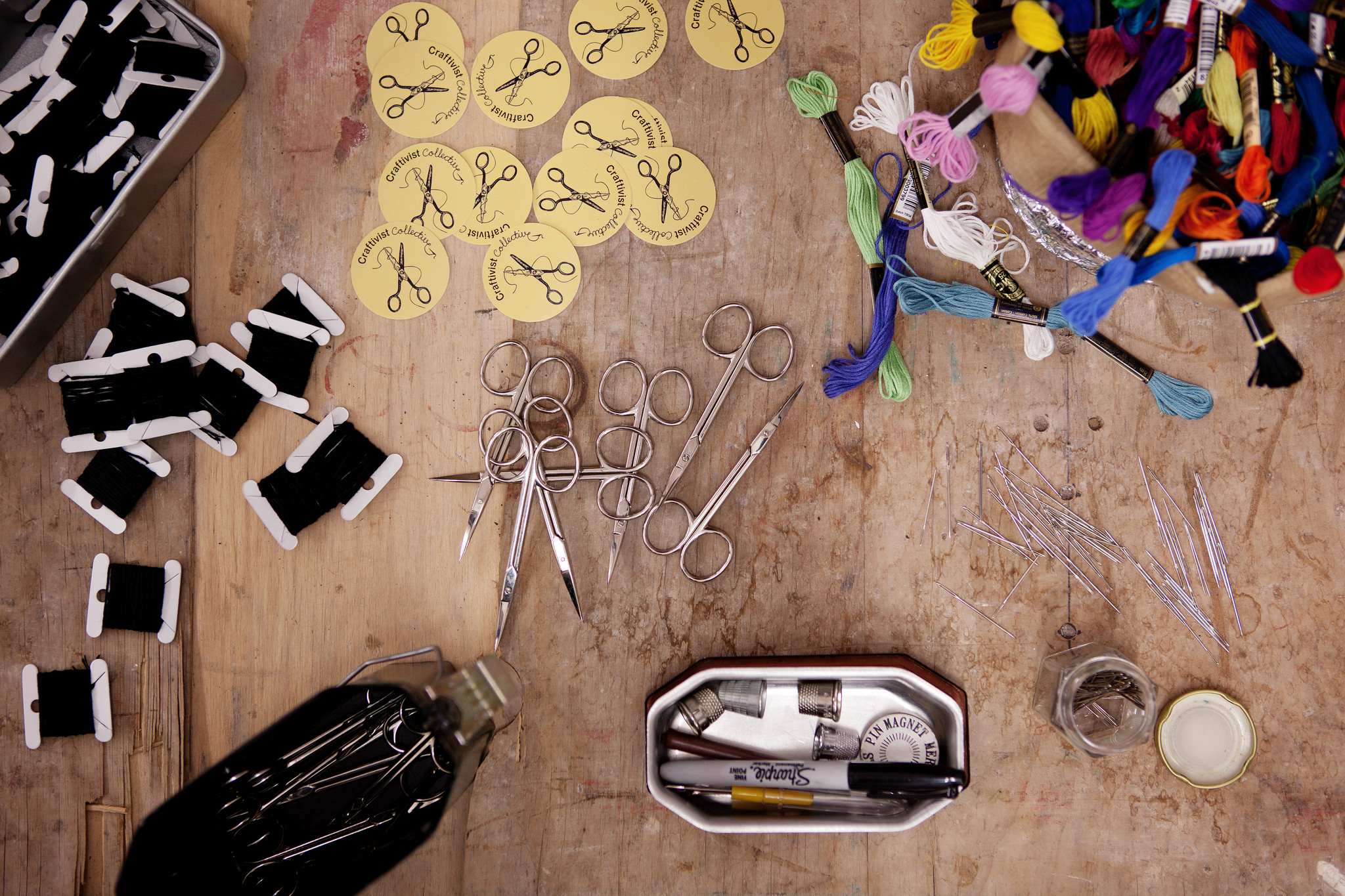 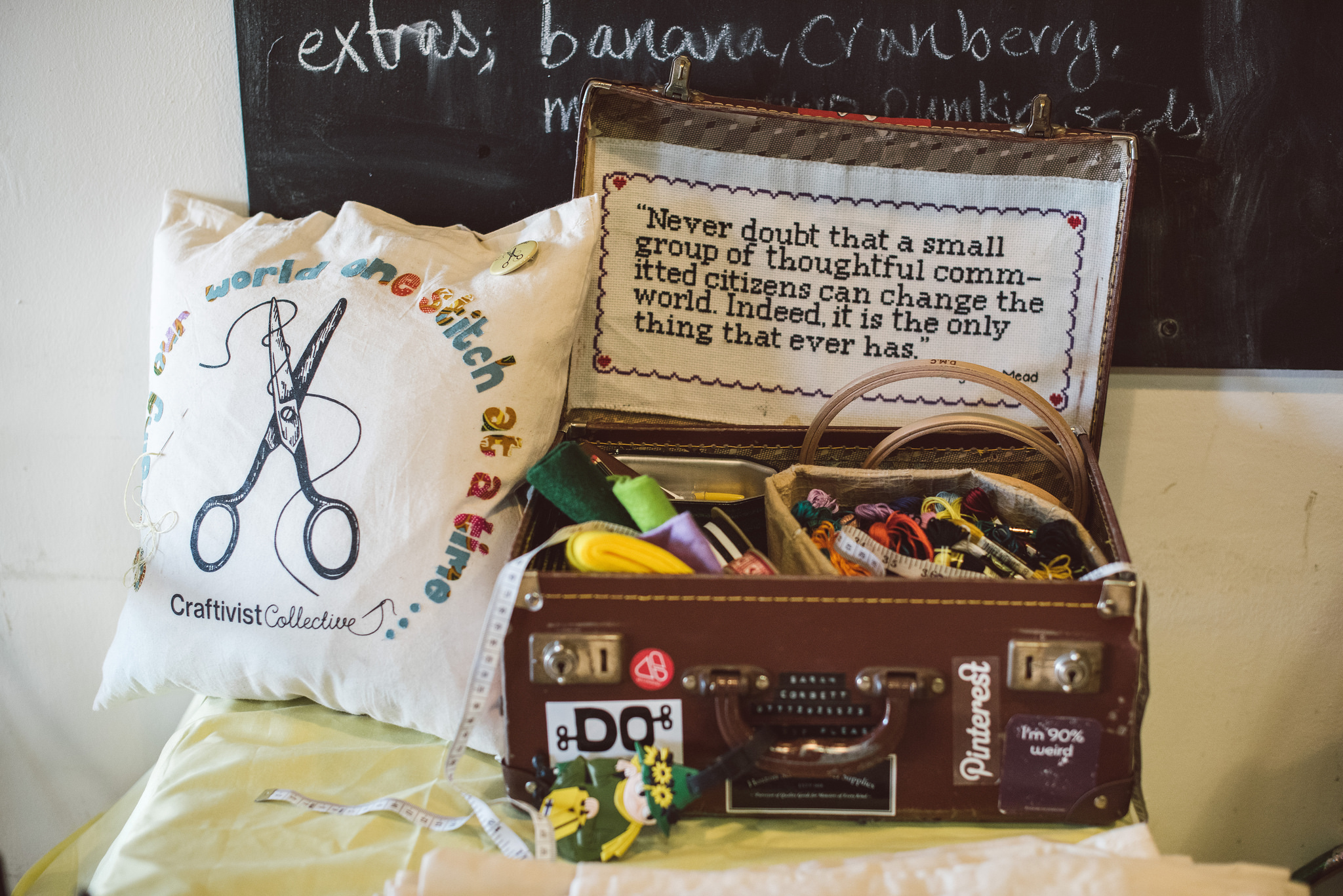 How do you stay positive in this era of cynicism?
Though things do seem bad I think it’s also a really exciting time. It’s now easier than ever to move to green energy and many companies are starting to invest more into sustainability. I guess corporations could be seen to be just greenwashing or good-washing, but even if that is the case it shows that sustainability has become part of our language in the general public. We need to build on that momentum and be the change we want to see in the world; wallowing in sadness and cynicism doesn’t help in the long run, but we can channel these feelings into something brilliant.

One of the issues during the US elections and the referendum was the lack of engagement between the opposite sides – how do you feel we can get past this?
I was shocked by Brexit, but I was in my own bubble on social media and everyone I was with shared the same opinions as me. I do feel to be told you’re a racist because you’re nervous about people coming in is unfair. We need to start putting ourselves in other people’s shoes and ask what would influence them. Shouting can make us feel better but often it doesn’t encourage people who disagree with us to listen or work with us. 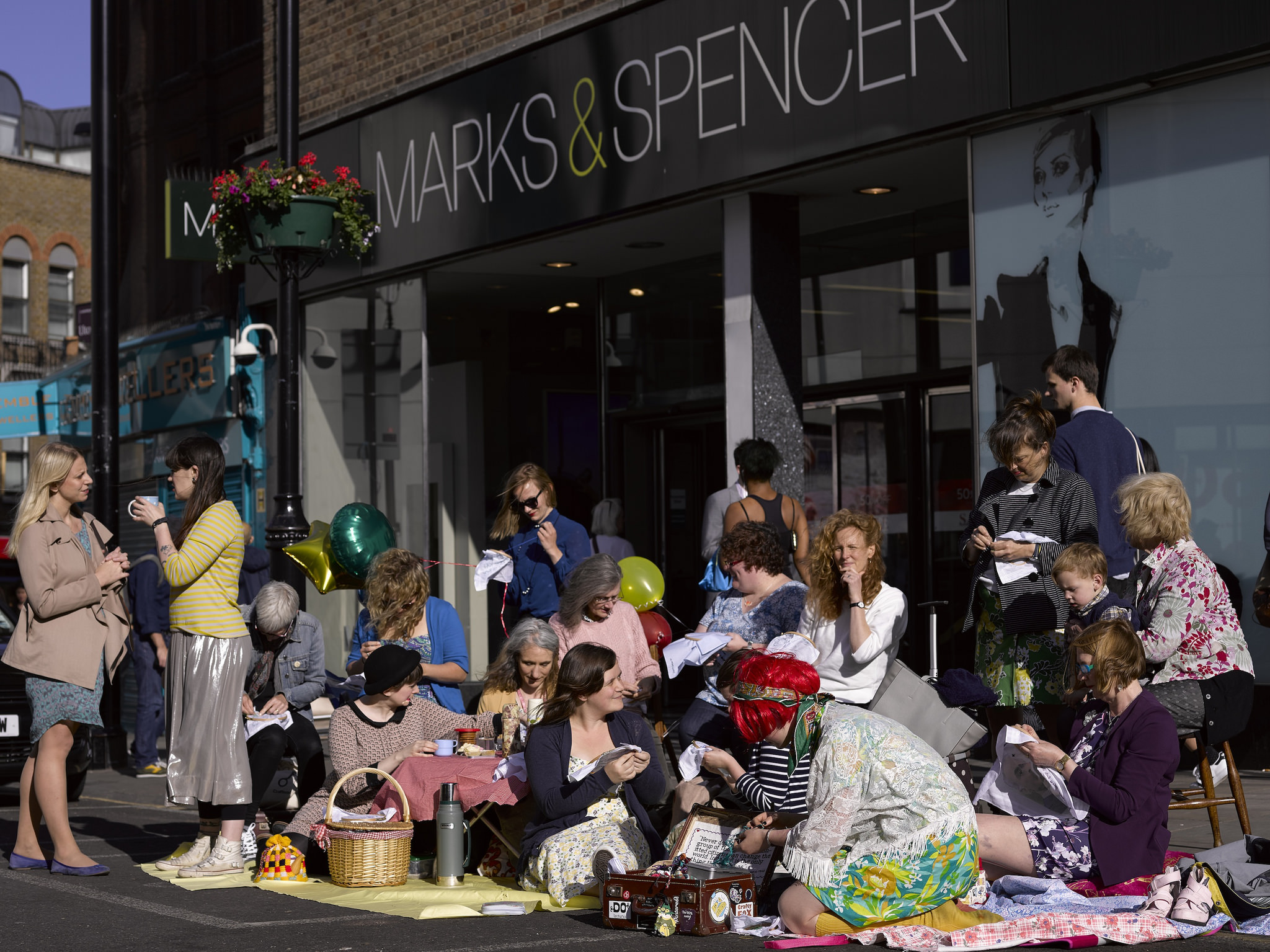 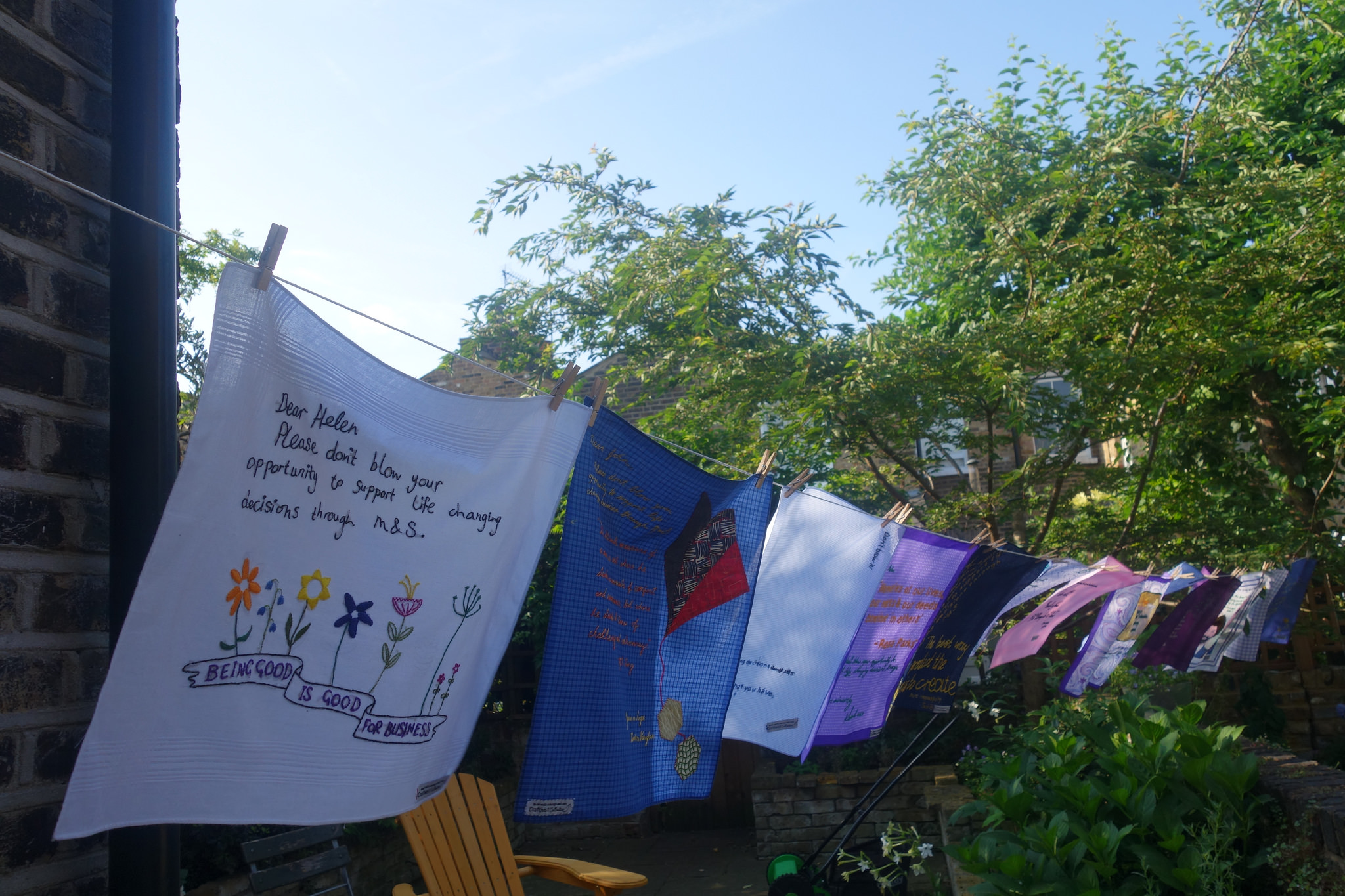 ou had some success with a crowdfunding campaign for your book How To Be A Craftivist: the art of gentle protest – tell us a bit more about the book…
It’s basically a how-to book, but not for dummies! Every chapter goes through the different ways craft can be good for activism. From being mindful of your motives and the importance of your message, to the power of beauty through activism. It’s a way of really looking at the methodology of being a good craftivist. We have over 500 preorders for the book and have exceeded our target. 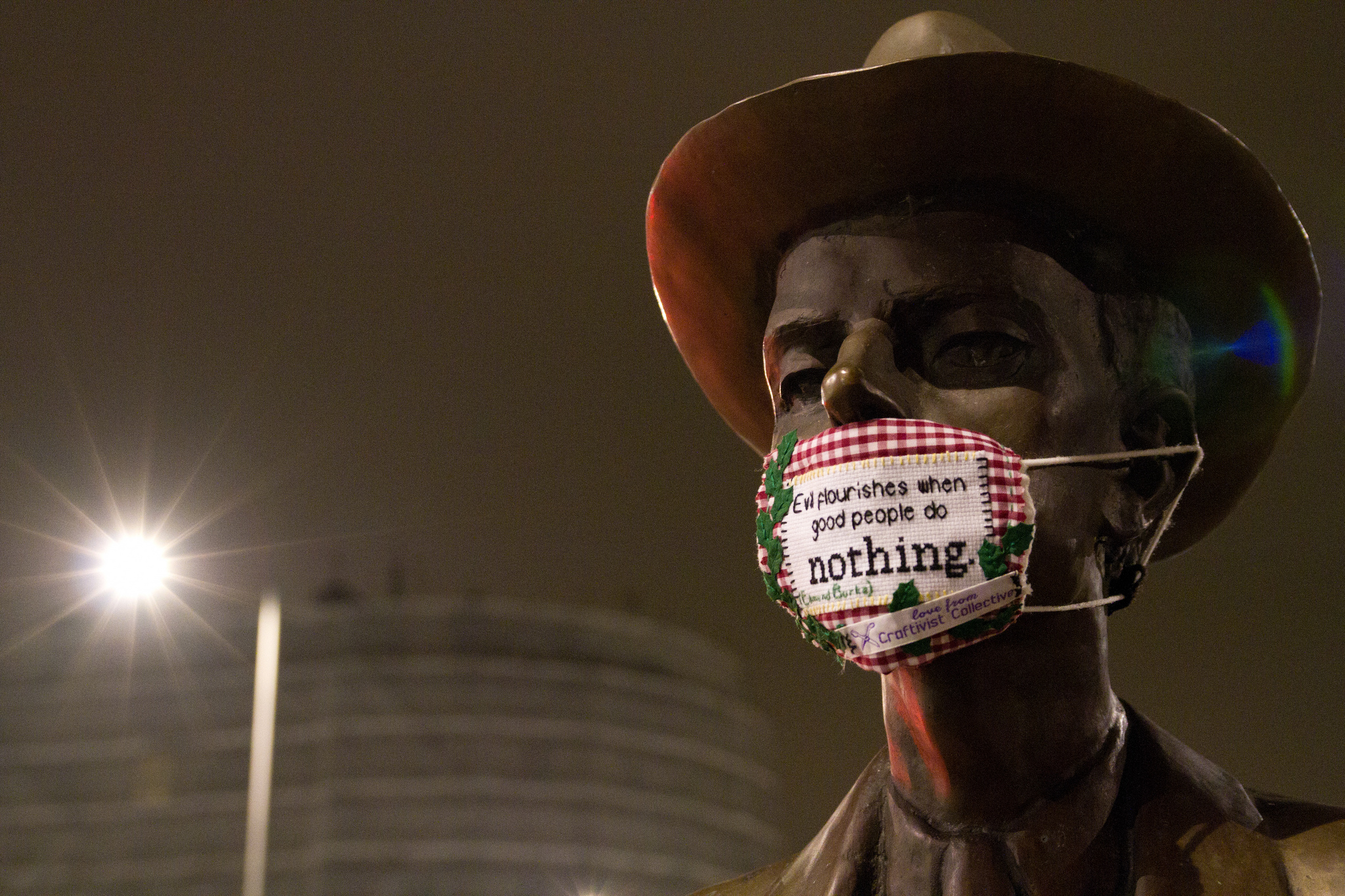 Do you think this time next year we’ll see a nation of craftivists?
Let’s not stop at the nation, let’s do the whole world! There are craftivists all over the world and considering things seem quite bleak now it could be a great tool for social change.

What would you say to people – particularly young people – who are feeling cynical about the future?
If we just give up then we won’t be able to change anything. It’s important to remind yourself that small actions can make so much difference. Young people are doing some incredible things now; I get so excited by all the independent zines coming out now, focusing on things such as feminism and mental health. The younger generations are mindful more about how they live their lives. So many defining moments in history happened because people went into the streets asking for change. It is imperative we keep fighting to bring a positive change to the world.

Find out more about Craftivist Collective.